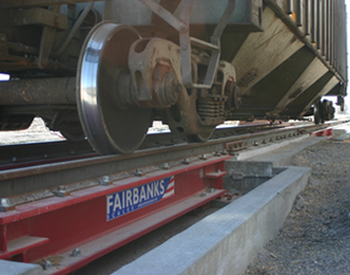 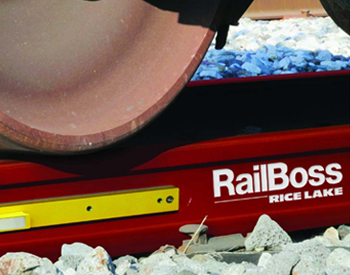 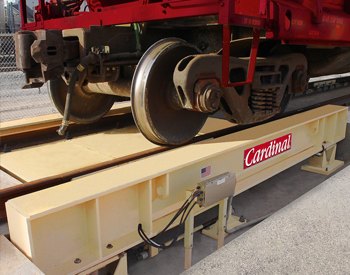 Rail Scales: Prevent overweight penalties on the railways with a rail road weighing system. The rail scale is installed into a section of an already existing railroad. Depending on the rail scale, the car and cargo can be weighed in motion or static.

Safe, heavy duty railroad track scales that are built to last. The advanced design of the 2000 Series minimizes the length of scale needed to weigh rail cars. This scale features easy, cost-effective installation, advanced modular construction and hermetically sealed 110K rocker column load cells. Best of all, the 2000 Series is virtually maintenance free after installation. These track scales meet all requirements of the Association of American Railroads and National Institute of Standards and Technology Handbook 44 and feature Fairbanks’ Intalogix® Technology.

For weight verification and other non-NTEP needs, the RailBoss rail scale is a cost-effective and easy-to-install method for weighing stationary railroad cars. Powered by Rice Lake’s 920i® and RailBoss software, RailBoss can be purchased as an eight-section Full-Draft system, or a simpler four-section Double Draft model. Many scrap yards, agricultural operations and plants that could not justify the space, installation time and cost of a conventional rail scale can afford to install our RailBoss rail scale. It usually takes less than eight hours to install and is less than one-third the cost.

Railcar weighing is a challenge—and Cardinal Scale’s USA-made railroad scales are built to meet the demands of harsh weather, heavy loads, and constant use. Cardinal Scale’s LPRA low-profile series and RSCA pit-type series railroad scales are both available with either electronic or hydraulic stainless steel USA-made load cells (Hydraulic load cells are impervious against lightning strikes and water damage). Cardinal’s railroad track scales are designed for longevity, accuracy, and efficient performance in every environment. They are built with heavy-duty rugged steel weighbridges, and each railroad track scale features a unique weighbridge design that keeps platform traffic from causing lateral forces to be transmitted to the load cell assemblies. This ultimately helps to keep the weighbridge in the right place and ensures secure, accurate measurements. Cardinal’s railway scales require little maintenance and come in a variety of gross capacities ranging from 100 tons to 270 tons.

For a variety of rail scales, contact our office.

Our Staff is ready to provide you with a weighing solution today.

If you have more detailed needs or prefer to email us.